Appearance:  Alysson has dark green eyes and buttery blonde hair oft gathered into fluffy ponytails that flow down past her shoulders. She has a light skintone with subtle color, smooth, with few imperfections from the sun. Her body is medium-framed, curvaceous, fit and toned, and her youthful visage holds fine and feminine features usually accompanied by a resting bitch face. It's not difficult to notice her military background, given her straight posture and well-disciplined body language.

Apparel:  She always wears the elegant yet practical uniform of the Witch Hunters of Drevia, consisting of a dark blue long coat over a thick, gray woolen long-sleeved shirt with a white cotton neck, and a leather harness with a pistol holster. Snugly-fitting black cargo pants and sturdy boots comprise her lower clothes.

Alysson's inner physiology is electromechanically modified beyond recognition. Biologically compatible metals comprise 70% of her body; flexible mail replaces conjunctive tissue and structures the body beneath the skin, her digestive system is artificial and much more efficient and shorter, taking up significantly less space for the Imperator tail to fit in. Articulations have been replaced with small hydraulic pistons, her spine and ribcage are entirely metallic, and what little bones remain are reinforced. This contributes to immense weight and augmented durability against physical damage - especially while the Imperator tail resides within her. The Imperator Nervous System can temporarily overcharge Alysson's hydraulic systems, resulting in greater responsiveness, better nervous stimuli, and increased movement speed. (+2 SPD, 3 posts duration, 4 posts cooldown). The witch hunter weighs a total of 185 Kg or 407 lbs.

Alysson's augmented nervous system allows her to process data at speeds equal to that of light itself, resulting in instantaneous reaction times, adaptability to random or sequential movements, and immediate understanding of combat scenarios, also removing the effects of feints, as she cannot flinch or be easily distracted given the removal of unvoluntary reactions. Her muscle memory bears great efficiency as well, allowing her to master movement patterns and stances after the first attempt, meaning she can perform feats that would require great skill and practice, without effort. Additionally, when this skill is activated, Alysson's central nervous system is temporarily driven beyond its limits, allowing her to perform every action in 1 turn with extreme reflexes and precision, as if the world around her moved in slow motion. Activation of this skill has a cooldown of 3 posts.

The Imperator Mk. II can be overcharged with high electrical currents, resulting in a crimson field of electric arcs coursing along the tail. With this skill enabled, the Imperator deals 65 mA of electrical damage to anyone who comes in contact with it, which also results in energy bursts powerful enough to knock back objects weighing up to 80 kg. Additionally, should Alysson strike with the energy field enabled, bolts of electricity will be released in the direction of any enemies within an area of 5 meters, provided they are conductive. Enemies subjected to this electrical power will be stunned and have their actions interrupted for a single move. This skill also allows the Imperator to take no damage from Energy-based attacks as the energy field acts as a shield, allowing Alysson to deflect spells so long as they are within a 3 x 3 ft area and their force and momentum is countered with a swing. Blocking ENR-based attacks may also release electrical bolts towards the enemy. The energy field will lose its power after 3 strikes, and must be charged for 4 posts before it can be used again. Electrical Overcharge can only be used 5 times per battle.

The Imperator is capable of generating electrical currents with a minimum tension of 5 V and a maximum of 220 V. While there isn't enough amperage to damage living beings, it can be used to power electronics and provide energy to anything conductive.

The Imperator System is capable of overtaking the human body should it cease to function, for all hydraulic joints and mechanical upgrades within are connected to the artificial nervous system. Such upgrades have also resulted in a longer post-mortem life for the brain, where it continues to function three times longer than a normal human being's. Should Alysson be killed by a lethal injury or lose consciousness, the Imperator System and her subconscious will begin acting on their own, taking control of Alysson's limp, lifeless body as if it were a mindless machine or a puppet, driven by an unstoppable killing instinct. Alysson may continue fighting after death, although she will be unable to make rational choices, come up with strategies, or think about anything besides fighting and obliterating her opponent through violence and brute force, there is a high chance she will be unable to discern friend or foe, and she will not respond to any communication attempts. In this state, Alysson cannot be stopped by poisonous or toxic substances that would negatively affect a human being, although she may still take physical damage from them, especially if they directly attack her brain. This skill provides no other benefits, cannot be upgraded, and will remain active for the rest of the fight. Alysson will take damage at normal rates. The user may still be permanently stopped if her body is crippled beyond use, or if her spine or brain are destroyed, as they are the main processors of the Imperator System. Once this skill has activated, Alysson cannot be pulled from this state or revived. Death is a certainty; if she is not stopped, her brain will cease to functon on its own.

A six-shot, double-action, top break revolver chambered in .45 long. 12 inches in length, made of solid blued steel, with a wooden handle and brass rivets and accents. This revolver is fed by moon clips, allowing quicker reloads. Three spare moon clips are carried in Alysson's waist bag. 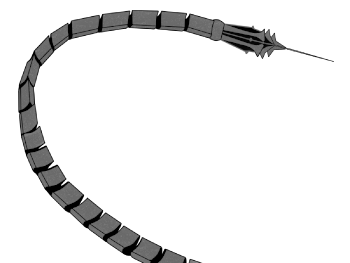 An electromechanical scorpion-like tail with a 13 Kg flanged mace head, a retractable 20 cm needle, and variable length reaching up to 8 meters. It is composed of 4 inch thick steel-like vertebrae with independently-moving joints that can twist, bend, or rotate the limb as the user wills. Their joint strength allows the Imperator to output thousands of kg/f - enough strength to easily launch an object weighing up to 1.5 tons.

The Imperator's mace head can split into four large 'fingers' to grab things with. Its needle possesses an arcane-inhibiting venom that prevents spellcasting for 1 post. This limb alone provides Alysson with a passive +5 STR.

This resistant lightweight mask protects the wearer from physical trauma and noxious breathable particles. It can withstand impact energies of up to 1,679 J - equivalent to a 5.56mm round - and filter non-corrosive gaseous substances. Additionally, the mask possesses an internal supply of breathable tranquilizing solution, which can be released by turning a small valve. This non-addictive substance prevents the wearer from giving in to despair during difficult situations, thus keeping the Imperator System from overriding emotional functions. 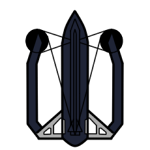 A tiny but highly potent mechanical crossbow mounted under her left wrist. It can hold a single bolt and requires the user to reload after firing, though it's fairly quick since it automatically tenses its string. The crossbow can retract and hide under her sleeve easily, and is surprisingly lightweight. It can use four different types of bolts that Alysson is equipped with.

Normal Bolt: A sharp bolt made of carbon fiber. It is the lightest and has greater velocity than the otheres. This bolt can easily pierce through flesh, bone, and light layers of armor.

Sleep Bolt: A bolt with a small vial containing a potent sleep serum that is injected on a victim upon piercing through their flesh. Fired on unsuspecting enemies, the effect will be instantaneous and they will be knocked out, suffering no damage. In combat, it'll take 2 posts for the serum to take effect, but this bolt can only be used on NPC's.

Explosive Bolt: A heavy bolt that explodes with the power of a hand grenade. Its damage is mostly incendiary and concussive, as it expells no fragments.

EMP Bolt: A bolt that delivers a powerful electromagnetic discharge upon striking its target. It can disable digital or electrical things with a single shot or shock enemies, interrupting their current action.

"The odds aren't in your favor. Are you sure you want to make this gamble?"